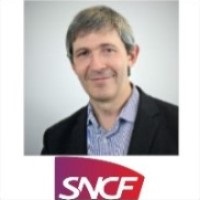 Program director for SNCF on the major "Smart Ticketing" scheme for the Greater Paris area (“Smart Navigo”), in partnership with the other local operators RATP and Optile, their combined joined venture (GIE Comutitres) and under the authority of the Ile de France Transport Authority (STIF).

In charge of :
Representing SNCF on the Smart Ticketing program along with the other partners. Push SNCF’s view and strategy, liaise with SNCF’s business, IT, financial teams and with upper management,
Coordinating the existing projects managed by SNCF on ticketing with the emerging common Smart Ticketing program,
Negotiating for SNCF the contractual and financial agreements of the program, keeping it consistent with the global SNCF-STIF operating agreement and in connection with the other partners of the program,
Animating and coordinating SNCF’s resources involved in the program,
Communicating on the program, which is one the largest IT programs of SNCF, within the SNCF group.

Main projects part of the program are :
Use of NFC smartphone for ticketing, validation and billing services for customers
Transfer of existing magnetic stripe tickets to card-based and smartphone-based services
Build of a new central platform in charge of managing customer accounts and post-payment services
Study the banking card-based “Open Payment” option

Transforming Paris’ ageing ticketing system: a bold vision for the future of mobility