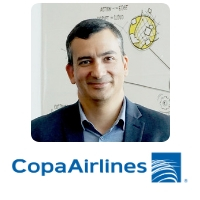 Julio Toro was appointed Chief Information Officer of Copa Airlines in 2015.  In this role, Julio is responsible for leading the technology strategy of the company, including the design, planning, implementation, and operation of information technology that support Copa’s commercial, operational, and customer initiatives.  Ranked by OAG as the most punctual airline in the world in 2018, Copa has leveraged digital technology initiatives as key enablers of its operational excellence.

Previously, Julio held senior management roles at Copa Airlines and led the implementation of several strategic projects.  Prior to joining Copa, Julio worked as a consultant and served as Vicepresident of Information Technology at Cable & Wireless Panama, the country’s largest telecom operator.

Julio holds a Bachelor of Science in Electrical Engineering from Texas A&M University, a Master of Engineering in Renewable Energy from the Technological University of Panama, and an MBA from TRIUM, a joint program by New York University – Stern School of Business, the London School of Economics and Political Science, and HEC Paris.  He has also completed the McKinsey Executive Leadership Program and Lean Six Sigma Black Belt training with GE.

He sits in the Board of Directors of Asociación Nacional de Conciertos, an NGO that promotes the education of young musicians in Panama through scholarships, instrument loans, master classes, and a Youth Music Camp held annually since 1986.