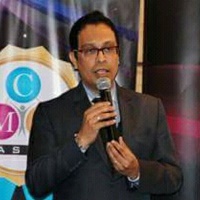 Rajesh Chakrabarti, ex CMO, CIO, Business Head and Head of Economic Intelligence at Reliance Capital turned entrepreneur in August 2014. Rajesh started out with ABP Ltd. where he was responsible for Ad revenues and Content driven sponsorship.
He moved to BVTI, where he led all Internet Initiatives of the group and was also part of the team that launched FTV in India and part of the team that launched the 1st Fbar in India.
RC then moved to Radio City. Rajesh and his team quadrupled revenue for the station in a short time and was also responsible for content driven revenue at the FM station.
UTV (now Disney India) was his next destination where he headed revenue, merchandising and licensing for Hungama TV. Rajesh was responsible in getting shinshan to India which elevated Hungama to the No. 1 kids channel status in just 9 months. Getting to no. 1 position elicited Disney’s interest in a buy out and the rest is history.
In 2006 RC moved to DCB BANK as Head of Marketing and Product Research and was instrumental in rebranding the bank. RC played a stellar role in DCB’s IPO which was a resounding success. He launched a fair number of asset based products and was part of the core team to create a profitable bank after years of losses.
In 2008 RC was picked up by Reliance Capital. Under RC’s leadership RCAP position itself as a leading player in the SME lending space. He lead innovation and was responsible for developing 14 new asset based products that did large volumes with high ROE’s. He launched Agricultural loans and within a year the product turned profitable.
With a masters in economics RC led the economic intelligence wing at RCAP and guided the organizations strategy process.
Currently RC is a consultant in the areas of Strategy,Brand, Marketing and Economic Intelligence.