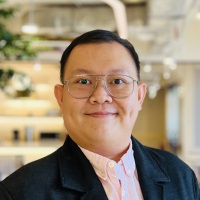 Boni Andika, Head of Marketing airasia Super App Indonesia has extensive experiences in marketing for various industries both in Indonesia and Malaysia markets.
Boni started his career as a Management Trainee (MT) at PT Astra International Tbk. group for Astra Insurance, where he was assigned as the Sect. Head of Retail Agency Development after the MT program. Later he made his mark in the FMCG industry by becoming a Key Account Manager at Danone Indonesia to manage several key markets, including eCommerce.
After several years of work experience, Boni decided to move to Malaysia and join as the Head of Campaign & On-site Merchandising for iPrice Group Sdn Bhd. His interest in campaigns and marketing sector continued by occupying the Head of Campaigns position at RinggitPlus.com, a well-known Fintech company in Malaysia.
Boni returned to Indonesia in August 2020 to accept an offer from iStyle.id as the Head of Social Media, Community & Influencer Marketing. In February 2022, Boni left iStyle.id to join airasia Super App Indonesia.
Prior to this current role, Boni was the Head of Brand Marketing for Delivery vertical which mainly focused on the airasia food, airasia ride and airasia xpress. Boni has shown outstanding performance in less than 6 months joining airasia Super App Indonesia. Therefore, his appointment and role expansion will strengthen airasia Super App's position in the industry.
As the Head of Marketing, Boni is responsible for managing all the brands under airasia Super App, including airasia flights, hotels, travelmall, food, ride, and many more to come.