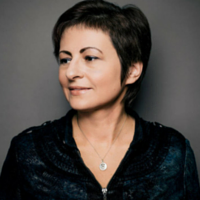 Dr. Nadia Shouraboura is the CEO of Hointer. Hointer is reinventing the shopping experience, making it easy and fun. At Hointer men and women have a new way of discovering, trying-on and buying great clothing.
Nadia was born in Soviet Russia and pursued her education in mathematics and science in the city of Moscow. In 1987 she began her career, after emigrating from Russia to Israel, as a software developer working on Computer Aided Design systems for industrial robotics. Her work attracted the attention of professors at Princeton University in the US, where she was offered a full scholarship for study and research. During her PhD work, Nadia performed research at AT&T Bell Labs and co-founded Starlight Multimedia, a developer of multi-media applications. Her work at Princeton resulted in several important papers, referenced by over 200 publications. She received a PhD in Mathematics from Princeton. In 1994 Nadia joined a technology startup, Diamond Technology Partners, working with a variety of major retail companies. Later she joined a JP Morgan Venture startup, Mobilocity, as its Managing Director in charge of the wireless division. Following her leadership role at Mobilocity, Nadia became a pioneer in the emerging world of energy trading, joining Exelon as the manager responsible for the energy trading algorithms and software.
Nadia joined Amazon.com in March of 2004. As Technology Vice President of Amazon’s Worldwide Operations she owned technology powering Amazon’s global supply chain and fulfillment. Nadia also served on Jeff Bezos' senior leadership team responsible for overall direction and operations of Amazon. Nadia lives in Seattle with her husband and sixteen year-old daughter.