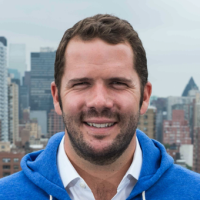 Michael Jaconi is the Co-Founder and CEO of Button, the leading mobile platform powering contextual commerce. Button’s Marketplace enables developers and marketers to connect their apps to the fastest growing companies in mobile commerce, opening up new channels of revenue and driving higher engagement. Button works with partners such as Uber, Foursquare, Airbnb, Ticketmaster, Glamsquad and Resy to deliver contextually relevant, personalized and highly valuable connected experiences at the touch of a button.

Jaconi formerly served as the CEO of Rakuten Loyalty and Executive Officer of parent company Rakuten. Michael helped build Rakuten Loyalty from a fledgling state to a multi-million dollar business in less than two years and led Rakuten's $100M investment in Pinterest, helping secure Rakuten's place as one of the most innovative and aggressive global internet companies. Prior to his tenure at Rakuten Loyalty, Jaconi co-founded two public affairs companies in Washington, D.C. and served in a variety of capacities within various political campaigns.

Jaconi started his first company at the age of 16, and has founded and managed four companies in the marketing and technology industries. Jaconi is a frequent speaker at entrepreneurial events and business schools and is studying part time at Harvard Business School in their OPM Program.