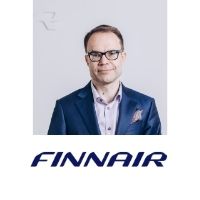 Tomi has worked as Chief Digital Officer (CDO) in Finnair since 1 October 2019.  He has wide experience as CEO/CIO in the software industry and IT. CEO experience for 5+ years in leading edge software companies. Worked 10+ years as CIO and a member of the executive team in a companies with up to 30.000+ employees. Typically lead major change situations like cultural change, organizational change, large IT projects, mergers, large outsourcing cases, IPO etc.. Two successful IPOs: one as Chairman and one as CEO. Mostly worked in international and multicultural environments.   Previously, he has served as the CEO of Vincit Plc between 2016?2018, CEO of Jolla between 2013?2015, and as the Chief Information Officer of Itella between 2005?2013 and Hackman between 2000-2005.Vincit was selected as the best place to work in Europe in 2016 while Tomi was the CEO of the company and tripled it?s sales in those three years. Tomi has Dr. Tech, M. Sc.(Eng.) and M. Sc. (Econ.). He lives in Finland and has lived previously in UK and US.