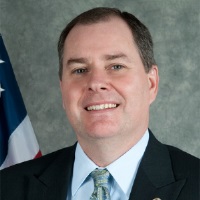 Shonnie R. Lyon is the Director of the Office of Biometric Identity Management (OBIM) for the U.S. Department of Homeland Security (DHS). OBIM is the lead entity in DHS for biometric identity management services across Government. Mr. Lyon is responsible for overseeing day-to-day operations of biometric services and working closely with the Department to advance biometrics.
Mr. Lyon has more than 30 years of management experience in the public sector and more than 20 years in the biometrics field.
Prior to being named the Director of OBIM, Mr. Lyon served as Deputy Director of the DHS United States Visitor and Immigrant Status Indicator Technology (US-VISIT) program, which provided identity management services – collecting, analyzing, and storing biometric and associated biographic data – to decision makers in Federal, State, and local law enforcement and intelligence agencies. Mr. Lyon worked at US-VISIT since the establishment of DHS in 2003, first as the Project Manager overseeing the development and deployment of the U.S. Government Biometric Entry-Exit program to air, sea, and land ports of entry.
Before the creation of DHS, Mr. Lyon served as a Chief Inspector in the Immigration and Naturalization Service where his last role was as the Deputy Director of the Entry-Exit Program Office.
Mr. Lyon is a former U.S. Army infantry officer. He has a bachelor’s degree in history from Louisiana College and a master’s degree in public administration from the University of North Texas. He is also a graduate of the Executive Education program at Harvard University’s Kennedy School of Government.