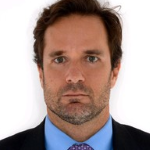 Marcio Derenne is a specialized officer at the Office of the Special Representative of INTERPOL to the United Nations, in New York.
Prior to his position at INTERPOL, Marcio served as Special Federal Police Commissioner at the Brazilian Federal Police from 2003. During this time he acted as Special Advisor for the Secretary of the Department of State throughout 2016, Chief of Extraordinary Advisor for the 2016 Olympic and Paralympic Games in Rio, and Special Advisor to the Sports Ministry from 2016-2017.
Mr Derenne has worked in partnership with the International Olympic Committee, undertaking an international mission to Tokyo in Japan to share experience with the 2020 Tokyo Olympic Games Team.
Marcio began his career as an investigator at the Rio de Janeiro State Police from 2000-2002 and a commissioner of the Parana State Police from 2002-2003.
Marcio holds a Bachelor of Law from Pontifical Catholic School, a Master’s in Criminal Law from Candido Medes University and a Master’s in Business Administration and Public Policy Management from the University Research Institute in Rio de Janeiro.
Marcio has been awarded seven medals of honor throughout his career including Tiradentes – State of Rio de Janeiro, Ordem dos Cavaleiros – Military Police, Amizade – Judiciare Police and Comando Nacional Polícias Militares – Military Police Commanders.