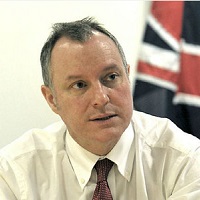 Born in Nigeria, Sir Iain Lobban graduated from the University of Leeds with a Bachelor of Arts in languages. He joined GCHQ in 1983 and undertook a variety of roles before joining the GCHQ Board in 2001.

He was a participant of the Cabinet Office's Top Management Programme that year. Whilst on the Board he was responsible for moving the operations of GCHQ into its new base at The Doughnut at Benhall, Gloucestershire. Before being appointed Director, Lobban was Director-General (Operations); having taken up this post in early 2004. He became the Director of GCHQ in July 2008, succeeding Sir David Pepper.

The Cyber Security Congress is two events: A world-class conference where business leaders from around the world meet; and, a unique cyber security and information technology exhibition. To visit the exhibition is free. There is, naturally, a registration fee to attend the conference.