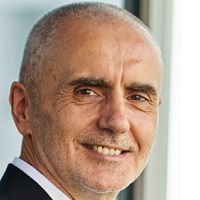 Vincenzo has over
30 years of global experience of drug development within major pharmaceutical
companies as Wellcome, Glaxo-Wellcome, GSK, Novartis and Roche.

He has held various
positions such as Head of Drug Surveillance, Head of Phase II-IV
Clinical Research and Head of Early Development & Clinical
Pharmacology for Asia Pacific. He has an extensive knowledge of all phases of clinical
drug development in multiple therapeutic areas including cardiovascular, liver,
lung diseases, neurosciences and oncology.

He received
his medical degree, Lung Disease and Internal Medicine specialist qualifications
from the University of Rome “La Sapienza”. He has published in major journals,
presented at numerous conferences and is the co-author of book chapters and named
inventor on patent applications.

He
is a member of: the Physicians-Surgeons and Dentists Association of Rome,and of
the American Society for Clinical
Pharmacology and Therapeutics.