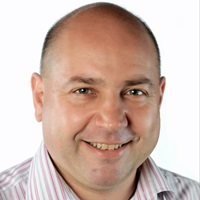 Education is my vocation. I became a educator in 2005 and since then haven't looked back. I worked as a Primary school teacher in the UK for several years before becoming a consultant for Learning Platforms. I achieved the accolade of Fronter Champion from Pearson Education for my work with their Learning Platform.

I moved to Malaysia in 2011 to work as the first Digital Integrator at Nexus International School, Putrajaya, where I began to build the Digital Integration across all year groups. I developed the Nexus TV initiative and a Digital Skills Professional Development programme for staff. I was awarded with the Taylors Presidents Award in 2013 for the outstanding work I had done at the school.

In 2013 I achieved my accreditation for Google Educator and Trainer as well as becoming a Google Certified Teacher. I also became an Apple Distinguished Educator.

In the same year I moved to Singapore to become Lead Digital Integrator at Nexus International School (Singapore) PTE Ltd, the sister school of Malaysia. In Singapore I brought he Nexus TV initiative to the school where I organised two film festivals, The Nexus Film Festival and as a result of this the Singapore International Student FIlm Festival. Both of these events were streamed live to the world. I also moved forward the Digital Skills Professional Development programme for staff. This programme was then extended to parents where Technology Awareness training courses are being delivered to close the gap between parents and learners knowledge of digital learning.

In July this year I moved to South Korea where I joined the Korean International School in Pangyo, just outside of Seoul. I took the role of Edtech Specialist as part of a team where I now work closely with teachers developing their skills in technology so that can integrate effectively in the classroom.

Finally I am the founder of the Edtech company AtTechEdu, which provides support for teachers, parents and students with Educational Technology. I am a regular speaker and workshop leader at summits and conferences throughout South East Asia where I run workshops based on the videos from AtTechEdu.