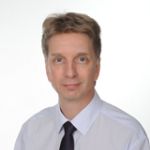 After gaining a BA Honours Degree in Primary Education, Ian taught in an ‘outstanding’ school in the UK, which won the Best Whole School category in the National ICT Awards. Ian moved to Malaysia in 2002, where he taught at a leading international school in Kuala Lumpur, holding the positions of Year Leader, Head of Primary ICT and Learning Technologies Leader. In 2007 he became an Apple Distinguished Educator and represents Malaysia on Apple’s Education Advisory Board. He often presents on various aspects of educational technology at conferences around the region.

Before entering the teaching profession, Ian earned a living as a rock drummer, a television camera operator, and ran a video production company. In 1990 he founded a charity, spending several years supporting orphanages in Romania. He has travelled extensively and has never overlooked the opportunity to try something new.

Ian enjoys mountain biking, swimming, photography, and is always excited about learning with technology. But most of all, he loves having adventures with his family.