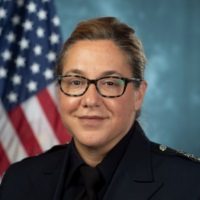 Diane J. Sabatino became the Deputy Assistant Commissioner of Office of Field Operations in July 2020.
In this role, Mrs Sabatino oversees nearly 31,250 employees, including approximately 25,400 CBP Officers and CBP Agriculture Specialists that protect U.S. borders. An annual operating budget of $6.5 billion provides for operations at over 330 ports of entry, and many programs that support the national security, immigration, customs, and commercial trade-related missions of CBP.
Prior to her current assignment, Mrs Sabatino served as the Director, Field Operations of Miami and Tampa Field Offices for nearly five years starting in August 2015. As the DFO, she had a workforce of over 2,800 employees with oversight of all inspectional operations throughout the State of Florida encompassing 12 seaports, including the top 3 cruise ship ports in the world; and 19 airports, to include Miami International Airport. While serving as the DFO, she was also designated as the Lead Field Coordinator for Incident Response charged with managing the response to multiple hurricanes for all U.S. Customs and Border Protection (CBP) resources that comprise FEMA Region IV.
From September 2011 to August 2015, Mrs. Sabatino served as the Port Director for CBP at the Port of Miami, managing complex operations for maritime cargo and the largest cruise passenger port in the country. Prior to her appointment as the Port Director, Mrs Sabatino was the Assistant Port Director, Passenger Operations, at Miami International Airport. In that capacity, she was responsible for the oversight of all international passenger inspections and enforcement activities.
A native of New Jersey, Mrs Sabatino graduated from Fordham University, New York City, with a Bachelor of Arts Degree in Sociology and a minor in Philosophy. She began her Federal Law Enforcement career in 1998 as an Immigration Inspector at John F. Kennedy International Airport.  Mrs Sabatino has also attended the John F. Kennedy School of Government, Senior Executives in National and International Security Program; and the Department of Homeland Security, Partnership for Public Service Fellows Program.