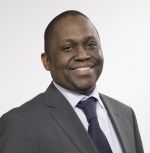 Tebogo started his career at Airports Company South Africa as a Mechanical Maintenance Engineer in 2000 at the then Johannesburg International Airport in the Maintenance and Engineering environment. During his 14-year tenure with the Company, Tebogo has held various positions, including Airport Manager of East London Airport and Assistant General Manager of O.R. Tambo International, during which time he was project leader of the 2010 FIFA World Cup South Africa Operations (2008 - 2010). In 2012, was appointed General Manager of the airport and joined the executive committee.

Tebogo has a BSc in Mechanical Engineering from the University of Cape Town, a Diploma in Advanced Airport Operations from IATA and an Executive MBA through the UCT Graduate School of Business. Tebogo was appointed the Chief Operating Officer (COO) effective April 2014.