Mr Gregory Pomerantsev | Chairman of the board
LIVE RIGA | Latvia 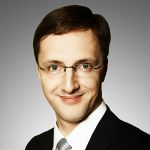 Gregory Pomerantsev is a Managing Partner of the aviation consultancy group "ALMA Avia Solutions" and a Chairman of the Board of Riga Tourism Development Bureau (LIVE RIGA).
Founded in 2009 by four shareholders - Riga City Council, AirBaltic airline, the Latvian Hotel and Restaurant Association (LVRA) and the Latvian Tourism Agents Association (ALTA) - the Bureau is mainly focused on encouraging tourism and business in Riga and promoting Latvia's capital abroad by means of a special city brand LIVE RIGA.
Gregory is an aviation professional with nearly 20 years of management experience in the airline and airport industry across the EU, Russia and CIS aviation markets. He held various senior positions in AirBaltic and SAS airlines – starting as SAS Deputy Country Manager Belarus and Head of AirBaltic Representative Office in Minsk (1996-2000) on to SVP Ground Operations (2001-2003) at AirBaltic followed by 8 years as SVP Sales & Marketing. He also held a CCO position at  BalticMiles -  a multi-partner coalition loyalty program.
Gregory's later assignments also include the positions of Commercial Director at NOVOSIBIRSK International Airport (Tolmachevo) in Russia in 2012-2013. During his 2-year contract with Siberia's biggest airport Gregory took the lead over development and implementation of the airport’s commercial strategy, acquiring new customer airlines (both passenger and cargo) and developing passenger transfer traffic thus turning NOVOSIBIRSK International airport into the efficient transfer hub.
In 2014 Gregory has been a CEO of FlyVista, a startup low-cost airline in Georgia. As a leader of the new airline he managed FlyVista during its establishment phase and launch of flight operations from its base at Tbilisi airport.