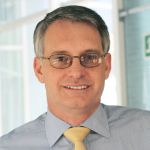 Erik joined Comair in 1996 as Financial Manager, and has held various positions within the company including Commercial Manager; Commercial Director and Financial Director.   In July of 2006 Erik was appointed as Joint CEO of Comair and served in this position until December 2011 when he assumed the sole responsibility for the company as Chief Executive Officer.   He remains in this position to date.
Whilst attending the University of Cape Town, Erik attained a B.Com and Post Graduate Diploma in Accounting and further completed his articles with KPMG qualifying as a Chartered Accountant (South Africa).
Erik previously served a term as Chairman of the Airlines Association of South Africa and was re-elected to serve a further term at their AGM held on 1 November, 2014.
Erik is currently a Director on the Board of Imperial Air Cargo.