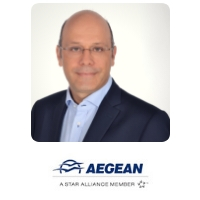 Roland Jaggi is a Swiss citizen who started his airline career at Swissair. After 12 exciting years in Sales and Revenue Management he moved in 2006 to Athens based Aegean Airlines where he has built up the Revenue Management and Pricing teams.
After first adding Distribution to his scope of responsibilities, the department that he is considering till today to be the “cherry on the cake”, he later also took charge of the Sales organization. Since fall 2018 he is now leading the entire Commercial Organization of Aegean Airlines.