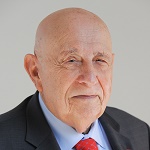 Dr. Stanley A. Plotkin is Emeritus Professor of the University of Pennsylvania, and Adjunct Professor of the Johns Hopkins University. Until 1991, he was Professor of Pediatrics and Microbiology at the University of Pennsylvania, Professor of Virology at the Wistar Institute and at the same time, Director of Infectious Diseases and Senior Physician at the Children’s Hospital of Philadelphia. In 1991, Dr. Plotkin left the University to join the vaccine manufacturer, Pasteur-Mérieux-Connaught, where for seven years he was Medical and Scientific Director, based at Marnes-la-Coquette, outside Paris. The same company is now named Sanofi Pasteur. He is now consultant to vaccine manufacturers, biotechnology companies and non-profit research organizations as principal of Vaxconsult, LLC. Dr. Plotkin attended New York University, where he received a B.A. degree, and then the State University of New York Medical School in Brooklyn, where he received an M.D. degree in 1956. His subsequent career included internship at Cleveland Metropolitan General Hospital, residency in pediatrics at the Children’s Hospital of Philadelphia and the Hospital for Sick Children in London and three years in the Epidemic Intelligence Service of the Centers for Disease Control of the US Public Health Service. He has been chairman of the Infectious Diseases Committee and the AIDS Task Force of the American Academy of Pediatrics, liaison member of the Advisory Committee on Immunization Practices and Chairman of the Microbiology and Infectious Diseases Research Committee of the National Institutes of Health. Dr. Plotkin received the Bruce Medal in Preventive Medicine of the American College of Physicians, the Distinguished Physician Award of the Pediatric Infectious Diseases Society, the Clinical Virology Award of the Pan American Society for Clinical Virology, the Richard Day Master Teacher in Pediatrics Award of the Alumni Association of New York Downstate Medical College, and the Marshall Award of the European Society for Pediatric Infectious Diseases. In June 1998, he received the French Legion of Honor Medal; in June 2001, the Distinguished Alumnus Award of the Children’s Hospital of Philadelphia, in September 2006 the gold medal from the same hospital; the Sabin Gold Medal in May 2002, in September 2004 the Fleming (Bristol) Award of the Infectious Diseases Society of America, in May 2007 the medal of the Fondation Mérieux, and in 2009 the Finland Award of the National Foundation for Infectious Diseases and the Hilleman Award of the American Society for Microbiology. He was elected to the Institute of Medicine of the National Academy of Sciences in 2005 and to the French Academy of Medicine in 2007. Dr. Plotkin holds honorary doctoral degrees from the University of Rouen (France) and the Complutense University of Madrid (Spain). Named lectures in his honor have been established at the Pediatric Academic Societies annual meeting and at the International Advanced Vaccinology Course in Annecy, France. His bibliography includes nearly 700 articles and he has edited several books including the standard textbook on vaccines, now in its 5th edition. He developed the rubella vaccine now in standard use throughout the world, is codeveloper of the newly licensed pentavalent rotavirus vaccine, and has worked extensively on the development and application of other vaccines including anthrax, oral polio, rabies, varicella, and cytomegalovirus.