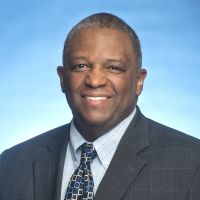 MTA-New York City Transit Senior Vice President of Subways Wynton Habersham has more than 34 years of dedicated service to NYC Transit, to which he brings a wide array of experience and skill. Wynton has developed a diverse background in Transportation Operations, Electrical/Signals and Capital Programs.

Wynton joined NYC Transit in 1982 in the Signals Division. He ascended through Signals and later joined Signal Engineering, designing signal projects and signal circuits and was part of a team that ushered in Communications Based Train Control, and developed the standards for the future of train control at NYCT.

While working under Capital Programs (Subways), Wynton managed $5 Billion in capital projects as the lead for the Department of Subways and represented the agency in the Design, Construction and Commissioning of the Fulton Street Transit Center and the South Ferry Construction Projects.

Wynton later returned to Electrical (Signals and Power) and was then appointed VP of MoW where he implemented innovative practices and technology to help catapult MoW towards the 21st Century. He developed an Enterprise Asset Management team, and led the Executive Committee on Fires, which introduced new procedures and practices that yielded positive results with a 20% reduction in fires.

After leading our Transportation Division as Vice President and Chief Operations Officer of Service Delivery Wynton was appointed Senior Vice President of the Department of Subways where now he leads 28,000 employees who are dedicated to providing safe and reliable service to nearly 6 million daily riders.