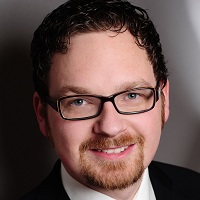 Mr. Mathias Pott-Stahmeyer works as Head of Information Technology and program manager for digitalization for stations at Deutsche Bahn. He represented the train station branch as Chief Sustainability Officer (CSO) from 2014 until the end of 2016. Before that, he has been the assistant to the Boardmember for Construction and Facility Management between May 2012 and December 2014. Before that he was Project Manager in several programs at Deutsche Bahn.

He got the Diploma Degree of Energy Management at University of Flensburg in September 2009.