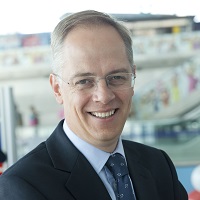 Jonathan started his career in 1986 as an Operations Management Trainee with British Rail.

This led to a number of operational and commercial jobs on British Rail’s former Southern Region culminating in a senior commercial role at London Bridge on the former South Eastern Division.

In 1989 he joined the then Trainload Freight Business Unit managing various contracts in the petroleum sector.  In 1992 he joined Rail Freight Distribution as part of the commercial team planning the launch of commercial services through the Channel Tunnel.  This led to a number of commercial roles following the opening of the Tunnel in 1994, particularly in the automotive and intermodal sectors.

In 1998 he joined Allied Continental Intermodal in Reading, a joint venture company between British and French Railways and Swiss forwarding company Intercontainer, as Chief Executive.

In 2001 he moved to English Welsh and Scottish Railways (EWS) as General Manager of its International Division, taking responsibility for all through freight traffic passing through the Channel Tunnel.  His tenure there included day to day management of the illegal immigrant crisis at Sangatte.

In 2003 Jonathan joined Transport for London as Director Rail Projects reporting to Managing Director Rail, TfL, taking sponsorship responsibility for TfL’s involvement in such projects as Crossrail and the East London Line.

In December 2004 he became Director DLR, managing £1bn of major project work upgrades, preparing DLR for the Olympics and overseeing construction and opening of the Emirates Air Line (cable car).

Currently, Jon is the Director of London Rail, which has responsibility for DLR, London Overground, Trams and Emirates Airline (cable car).