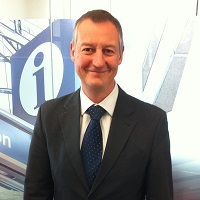 James joined British Railways in 1981 at Derby Locomotive works winning the Fredrick Simpson Apprentice of the year Award. He then moved on to the testing section at Stephenson House before joining the Plant and Electrification department for Regional Railways and then Network South East. He then moved on to the position of Project Manager on: the London Tilbury & Southend and Great Eastern resignalling schemes, Docklands Canning Town and the Northern Line upgrades at Edgware, High Gate and High Barnet. He returned to Traction & Rolling Stock at Bletchley Depot as Depot Manager and then Maintenance Manager at Siemens Northampton before spending time in Brussels with the Community of European Railway as a Senior Policy Adviser ERA (European Union Agency for Railways) & Research. James moved back to the UK and joined Network Rail in 2012 to Project Manage IPEMU (Independently Powered Electric Multiple-Unit) and other Traction & Rolling Stock related schemes.