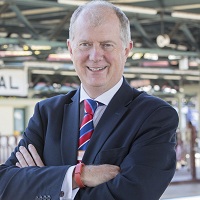 Howard Collins is the Chief Executive of Sydney Trains.  Previously the Chief Operating Officer of the London Underground, he had a 35-year career with London transport.
Since Howard’s appointment as Chief Executive of Sydney Trains in 2013, the network has seen major patronage growth, record breaking customer satisfaction rates, which currently stands at 90%, a reduction in peak incidents and safety performance now better than most benchmarked operators in Australia.

He is also a board member of the Australasian Railway Association (ARA) and currently Chair of the ARA’s Passenger Transport Group.  He is also Director of TrackSAFE and Transport Heritage NSW.

In 2013, Howard was made an Officer of the Order of the British Empire (OBE) in recognition of his success as the Lead Director for the London Underground and London Rail for the 2012 Olympic Games and for services to Public Transport.
Howard is a keen media spokesperson for a wide range of transport issues and a keynote speaker at many national and international events.