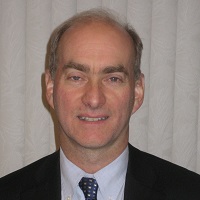 David Dimmer is the Director of Urban Rail Product Strategy for Thales Urban Rail Signalling  He has been working for Thales since 1987.  During that time he has had a leading role in the design and implementation of train control systems for Docklands Light Railway, San Francisco MUNI, the Ankara Metro, Shanghai and Beijing Metros, plus APMs at Tampa Airport and Newark Airport.

He was the technical lead for the development of Thales’ radio based CBTC product, which has been installed on five lines in Shanghai, and individual lines in Beijing, Kuala Lumpur, Disney World and Hong Kong Airport.  It is currently being implemented in seven other projects worldwide including the Doha Metro, and the DUAT seven line resignalling project in Hong Kong.

David participates in standardization work, and is the Canadian representatives on IEC Working Group 40, which is developing an international standard for Communication- Based Train Control systems.  He was also the Technical Leader for the recently completed Next Generation Train Control (NGTC) research project in Europe which investigated synergies between ETCS and CBTC systems and developed solutions for future urban and mainline systems.