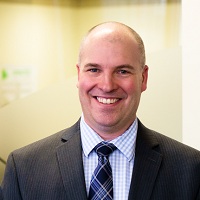 Brad is the City of Edmonton’s Project Director for Edmonton’s Valley Line Stage 1; a 13 km urban-style, low-floor LRT system which will run from downtown to southeast Edmonton. The Valley Line is the City’s largest infrastructure project to date, and its first project to be delivered as a Public-Private-Partnership (P3).

Brad is a graduate of Civil Engineering from the University of Alberta. Brad began his engineering career in the private sector, and was involved in heavy civil construction, bridge inspection, and railroad engineering, prior to joining the City of Edmonton. Brad has been involved in the implementation of Edmonton’s recent LRT expansion projects, including the South LRT (Capital Line), North LRT (Metro Line), and Southeast LRT (Valley Line).

In addition to his work responsibilities, Brad is a minor hockey coach, a Scout leader, a Past Chair of the Association of Professional Engineers and Geoscientists of Alberta (APEGA) Edmonton Branch, and a past Vice President of the Canadian Society for Civil Engineering (CSCE) Western Region. In 2015, Brad was honoured to receive a Certificate of Fellowship from Engineers Canada and the James A. Vance Award from the Canadian Society for Civil Engineering