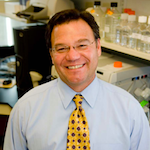 Dr. Scott Tenenbaum is Associate Professor of Nanobioscience at the College of Nanoscale Science and Engineering of the SUNY-Polytechnic Institute.  Previously, he served as the Acting Vice President for Research and Associate Head of the Nanobioscience Constellation at CNSE.  He received his Ph.D. in Microbiology and Immunology from Tulane University Medical Center and did his post-doctoral training at Duke University Medical Center, where he helped pioneer RIP-Chip/Seq technology and the field of “Ribonomics,” which is the genomic-scale study of post-transcriptional gene regulation.

Dr. Tenenbaum holds 19 issued or pending patents which have served as the basis for three biotechnology start-up companies including his most recent, HocusLocus LLC in the NY Capital Region. He has been awarded numerous honors, including The James A. Wilson, M.D. Fellow in Cancer Award; The Robert M. and Barbara R. Bell Basic Science of Cancer Award; The SUNY Golden Apple Teaching Award; The SUNY-Research Foundation Rising Star Award; and most recently, The SUNY Excellence in Research Award.

Dr. Tenenbaum is funded by the NIH and the NSF through traditional and SBIR/STTR mechanisms.  The focus of his research project is RNA and RNA-bindng protiens. Most recently, he is focused on developing an RNA nano-switch technology  called sxRNA to be used as a molecular tool, a dignostic and as a therapeutic.