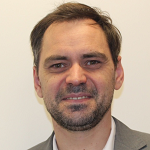 Dr. Nicolas NOULIN completed a PhD in immunology and Molecular Biology at Orleans University, France. Innate immune system and respiratory tract inflammation were the main topic of his thesis.  He then continued his scientific career as a Research Associate at Pasteur Institute in Paris, where he worked on vaccine against Highly Pathogenic Avian Influenza H5N1 virus using a mouse model.
In 2010 he joined hVIVO, a London-based company pioneering a technology platform which uses human models of disease such as common cold and Influenza. He holds a position of Principle Virologist at hVIVO and his role is mainly focused on designing, supporting, managing and analysing data of clinical studies involving challenge of human volunteers in quarantine facility with respiratory viruses such as Influenza, Rhinovirus and RSV. In particular Nicolas is in charge of a serology screening project that tests serum from 5,000 to 10,000 volunteers a year as part of the qualification of subjects for virus challenge studies.