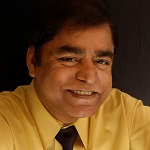 Professor Henry Daniell
Dr. Henry Daniell is Professor and Director of Translational Research at the University of Pennsylvania.  He is the Fellow of the American Association for the Advancement of Science and a foreign member of the Italian National Academy of Sciences (14th American to be inducted in the past 230 years) and the Editor in Chief of the Plant Biotechnology Journal, Oxford, UK.  He is recipient of several awards including the American Diabetes Association Award, American Heart Association, Bayer Hemophilia global award and Bill and Melinda Gates Foundation Award for his outstanding contributions. He pioneered chloroplast genetic engineering as a new platform to produce and orally deliver low cost vaccines and biopharmaceuticals bioencapsulated in plant cells. His invention was ranked by Nature Biotechnology among the top ten inventions of the past decade and among Biomed Central’s Hot 100 authors in the world. He has >100 published patents and >200 scientific publications. For more details visit Google Scholar: http://scholar.google.com/citations?user=7sow4jwAAAAJ&hl=en