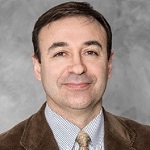 Dr. Perez is Georgia Research Alliance Distinguished Investigator and Caswell S. Eidson Chair in Poultry Medicine in the Department of Population Health, Poultry Diagnostic and Research Center at the University of Georgia in Athens, GA. Up until recently he was Professor of Virology in the Department of Veterinary Medicine, University of Maryland, College Park. Dr. Perez has more than 20 years of experience in influenza research. The scope of his research has been fairly broad, spanning numerous areas of influenza biology, including molecular biology, viral pathogenicity, vaccine development, viral evolution, and viral transmission, especially as it relates to the molecular determinants of animal to human transmission and adaptation. He has been the lead scientist in numerous grants and he was Director of the Program for the Prevention and Control of Avian Influenza in the United Stated from 2005 until (its end in) 2012.  Dr. Perez’s lab is an integral part of the Center for Research on Influenza Pathogenesis, one of five NIAID-sponsored Centers of Excellence for Influenza Research and Surveillance. Dr. Perez has devoted significant effort in the development of alternative live attenuated influenza virus vaccines with the potential to protect poultry, livestock and human against influenza virus infections. Influenza viruses with specific mutations and genome rearrangement have been developed that protect against influenza in various animal models. In addition, Dr Perez’s lab is exploring the potential for in vivo reverse genetics as an viable alternative to live virus vaccines.