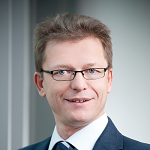 During his career, Dr. Meinke has authored and co-authored more than 70 publications lectured in several University programs and filed more than 20 patents in the field of antigen discovery.