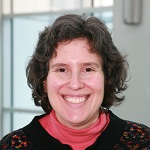 Susan Sharfstein received her B.S. in chemical engineering with honors from Caltech in 1987 and her Ph.D. in chemical engineering from UC Berkeley in 1993, receiving graduate fellowships from the university and the National Science Foundation.  She received a National Institutes of Health Individual Research Service Award to pursue postdoctoral studies, initially at UC Berkeley and subsequently at the UCLA Medical School. Dr. Sharfstein joined the faculty at the University of Toledo in Bioengineering in 1996. In 2000, she received a National Science Foundation POWRE award to study glycobiology at the New York State Department of Health Wadsworth Laboratories.

In 2001, she joined the Department of Chemical and Biological Engineering at Rensselaer Polytechnic Institute, and in 2007, she received a dual appointment in Biology. In 2010, she joined the faculty at the SUNY Polytechnic Institute, Colleges of Nanoscale Science and Engineering as an Associate Professor of Nanobioscience. Professor Sharfstein received an NSF CAREER grant in 2000 for her work on hyperosmotic stress responses of hybridoma cells and the School of Engineering Education Excellence Award and the Class of 1951 Outstanding Teaching Award in 2007. Professor Sharfstein’s research interests include mammalian and microbial cell bioprocessing, control of protein glycosylation, metabolic engineering, biosensing, and development of systems for high-throughput screening of nucleic acids and small molecules. Professor Sharfstein serves as the subject editor for biotechnology for the Elsevier Major Reference Work Life Science Module. She is the author of over 60 papers and book chapters in the fields of biotechnology and bioprocessing.