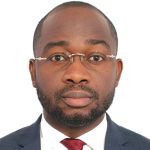 Dr. Richard Appiah Otoo is the Chief Manager responsible for the company’s technology direction with key focus on commercial and operational efficiency. He is responsible for the GIS and Network Modeling Unit, Information Technology Unit, Metering, Instrumentation and Non-Revenue Water Unit, as well as the Research and Development Unit. Prior to this, he was the Manager for the GIS Department and also led the Non-Revenue Water and Prepaid Metering Technical teams under AVRL. He joined GWCL as an Engineer and has worked in the Water and Technology sector since 2003. He worked in the past as Team Leader for the Commercialization of Sierra Leone Water Company under the African Development Bank, Consultant for United Nations FAO; Project Advisor UN Habitat on Water for African Cities project, GIS Consultant to the German Technical Co-operation, Consultant for Nokia Siemens Networks NV in Gabon and Ghana on Fiber Optics projects. He was an adjunct Professor for Public Health and Environment at KNUST AISEM, Ghana. He has co-authored a number of peer-reviewed journal articles.

He is a professional member of the American Society of Civil Engineers, Ghana Institution of Engineers, Project Management Institute, American Water Works Association, and International Water Association. He has received numerous awards including 2015 International Planetary Urbanism prize initiated by ARCH+ together with the German Federal Foreign Office and German Advisory Council on Global Change, 2009 Commonwealth Scholar given by the British Government, 2013 MASHAV Scholar given by the Israeli Foreign Affairs Ministry, 2011 African Geospatial Excellence Award among others.

GET INVOLVED AT THE WATER SHOW AFRICA 2020