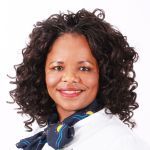 Dr Jennifer Molwantwa was born and bred in Kagiso Township, in the west of Johannesburg is the Executive: Water Resource Management at the Inkomati-Usuthu Catchment Management Agency (IUCMA) in the City of Mbombela, Mpumalanga Province. She received her tertiary education in the Eastern Cape where she obtained a PhD degree in Biotechnology, at Rhodes University in mine-water treatment. A registered Professional Natural Scientist (Pr. Sci. Nat.), an active member of WISA since 2004 where she received the WISA Mine Water Division Best Paper Presented by a Student (2004) and Excellence in Research Award for a young scientist from in 2006. Jennifer was also instrumental in the establishment of the WISA YWP network in 2006. Her career included being a consultant at Pulles Howard & de Lange, Golder Associates Africa and Digby Wells. She served on the National Planning Commission that developed the National Development Plan (NDP) and Vision 2030, on the UKZN Council and represented council in Senate. Before joining the IUCMA, she was appointed as a Research Manager at the Water Research Commission (WRC). Her passion is in Capacity Building in particular the inclusion of previously disadvantaged individuals in the main stream economy. As such she mentors young people in every capacity she was appointed in. She was quoted saying: “the road is open for women to participate at all levels of the economy, in science and technology and education/ knowledge generation as well as in business. This makes the biggest task of young women so simple, as they only have to desire it and access it from other women before them” as a patriot, she believes, “We have to have empathy to be able to at least fight for the cause of the marginalized together with them. Educate a woman and educate a nation’.

GET INVOLVED AT THE WATER SHOW AFRICA 2020