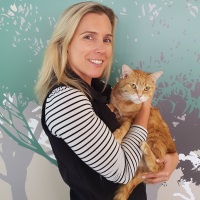 Jana is a graduate of the University of Sydney. She worked for a number of years in general practice in Victoria and NSW prior to completing a rotating internship at the University Veterinary Teaching Hospital, Sydney. In 2013, Jana attained membership of the Australian and New Zealand College of Veterinary Scientists in small animal medicine. In 2014, Jana started a residency in Small Animal Medicine at the University Veterinary Teaching Hospital, Sydney which she completed in 2017. During her residency, Jana completed a research paper on the pharmacokinetics of caspofungin in cats (a novel treatment for fungal disease), as well as published a paper on a cat with an adrenal adenocarcinoma and concurrent meningioma. After 5 years at the University of Sydney, Jana joined the team at the Small Animal Specialist Hospital as a medicine clinician. Jana’s special interests include interventional radiology/endoscopy (including minimally invasive procedures), nephrology and gastroenterology.