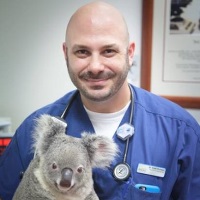 Dr Gumpel is originally from Buenos Aires Argentina but spent most of his life in Houston, Texas. He graduated from Texas A&M College of Veterinary Medicine in 2004 and became a small animal general practitioner thereafter until 2008 in Houston. Following successful completion of a radiation oncology internship and residency at Gulf Coast Veterinary Specialists in Houston in 2011, Dr Gumpel relocated to the Brisbane Veterinary Specialist Centre the following year and became board certified in the specialty of Veterinary Radiation Oncology under the American College of Veterinary Radiology in 2013. He is the head of the Radiation Oncology service at BVSC, where well over 1100 patients have been treated with the first, and longest-running linear accelerator for veterinary use in the southern hemisphere.