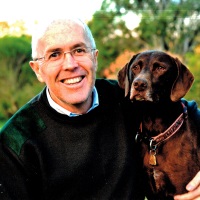 Andrew has practised veterinary science in the Macarthur region of NSW since graduating in 1987. He has always had a strong interest in behaviour which he harnessed in his mixed animal and small animal practice. Since gaining membership of the Veterinary Behaviour chapter of the Australian and New Zealand college of Veterinary Scientists in 2008 he has provided a comprehensive veterinary behaviour service out of his practice in Narellan NSW. In 2012 he established a veterinary behavioural service at the University Veterinary Teaching Hospital (UVTH) Sydney. In 2015 he began a three year residency program in Veterinary Behavioural Medicine under the tutelage of Dr Kersti Seksel from Sydney Animal Behaviour Service and Dr Jacqui Ley from Animal Behaviour Consultations unfortunately he had to withdraw from the residency in August 2017.
Currently he heads up the veterinary behavioural service at the UVTH Sydney and at his own practice.