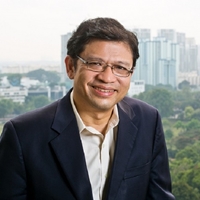 George Loh graduated from The Ohio State University, USA with a Bachelors degree in Computer Engineering in 1986 and The University of Southern California, in 1995 with a Masters degree in Industrial and Systems Engineering. Mr Loh spent more than 20 years from in the defence industry as a government employee from 1989-2011. He was responsible for large scale systems integration and acquisition of defence systems as well as for formulation of defence R&D strategy and for technology management of defence R&D programs. He was awarded the Defence Technology Training Award in 1993 to pursue a Master of Science degree in Industrial Systems Engineering at the University of Southern California, USA.
George Loh was the Deputy Head, Defence Technology Office (United States) at the Embassy of Singapore in Washington DC from Mar 2003 to Oct 2006. He was responsible for defence technology cooperation including the US DoD, Military Services, research institutes and universities. In Nov 2006, Mr Loh was appointed the the Head (Maritime Systems), Defence Research & Technology Office in Ministry of Defence to develop the Research and Technology (R&T) portfolio in Maritime Systems. He was also responsible to formulate the policy and long-term investment strategy for defence R&T as well as to build-up indigenous maritime-related capabilities in the local defence ecosystem.
George Loh, Director (Programmes), joined National Research Foundation in Oct 2011 and was responsible for the development of the scientific and R&D strategy and R&D capabilities in the ecosystem, in particular in physical sciences and engineering, and for development of the scientific programme with the stakeholders in the government agencies, in the academia and the industry. He manages programmes such as the Corp Lab @ University, National Cybersecurity R&D, and Virtual Singapore to ensure the desired outcomes are achieved.