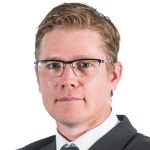 Dr Clinton Carter-Brown is the Energy Centre Manager at the South African Council for Scientific and
Industrial Research (CSIR), leading the energy research agenda of the CSIR. Clinton has held snr
leadership roles in the energy domain in the public and private sectors. He spent 18 years in Eskom,
after which he joined Aurecon (with secondment to the Department of Energy IPP Office) and
currently the Council for Scientific and Industrial Research (CSIR). He has extensive experience in
energy systems, distribution electrical utility management, power system simulation, expansion
planning, generation procurement and grid integration.
Clinton has BSc (Cum Laude), MSc and PhD degrees in Electrical Engineering. He is a registered
professional engineer with the Engineering Council of South Africa, and is the recipient of the South
African Institute of Electrical Engineers (SAIEE) Young Achievers Award for 2003, and 2003 Eskom
Chairman’s Award for Technical Excellence and Innovation. Clinton was awarded 2012 specialist of
the year in the Eskom Technology Group. He is the outgoing South African representative on CIGRE
Study Committee C6, Distribution systems and Distributed Generation.

*By signing up, you agree to join our mailing list to receive information and updates about Terrapinn events globally.