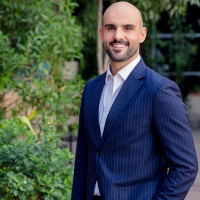 Hisham Albahar was born in Iraq and raised in Kuwait. He is holding a Bachelor’s Degree from American University of Beirut. His successful career path had a humble beginning, having worked as a Ground Courier & Operations staff at FEDEX from 2004 until 2007. It was in 2008 when determination and perseverance drove him to step up as Sales Executive.  Innate with notable social skills and ability to articulate his goal, he was given the post as Sales Manager in 2011.
The highlights of his career were underway in 2013 when he joined Posta Plus as Country Manager for Kuwait Station, a fast rising company for courier and logistics domain that has proven a solid mark in its customized services while going at par with giant competitors in the market.
After remarkable results of new projects initiated, sparked by his skills & strategic abilities in the corporate world, Hisham Albahar was appointed as Country Director and Board Member in 2016. During his leadership, significant growth for the station was observed. All these paved the way for him to be the Regional Director in early 2017. In this new important role, he will be in charge in overseeing management of all stations in the Middle East namely Kuwait, Bahrain and UAE as well as office facilities in Canada, US, UK and China.
Still warming up his latest post, his undying drive for achievements set the stage for yet another career milestone when given the top post as Group CEO in June 2017.
Staying true to his personal mantra that “One does not discover new lands without consenting to lose sight of the shore”, he is keen to bravely explore new profitable opportunities for Posta Plus and continue to have the power in leading the industry.