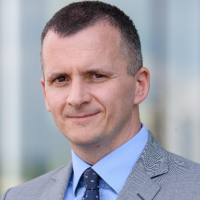 Ferenc has started his career at Ernst&Young in 2001, and switched to the banking sector in 2005 joining K&H Bank (member of KBC group). Then he joined NESS Technologies as senior consultant in 2008, where he managed major IT related projects at a major Bank in Hungary. He joined CIB Bank (member of IntesaSanPaolo) as Head of IT Development in 2012, and executed several major Business related IT developments.
He joined OTP Bank in 2015, where he leads the IT Project and International Subsidiary Management Directorate. He is responsible for the Bank’s IT project portfolio, and the harmonization of the international subsidiaries IT areas.
He is Board member in OTP Bank Russia, and Vojvodenska Banka Serbia (part of OTP Group).