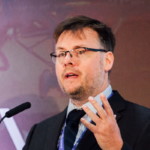 Mark Lockie is Identity Week’s Event Director and the founder of Science Media Partners Ltd, a UK-based media and events company, which is part of Terrapinn Holdings.
For more than 20 years, Mark has developed world-leading international conferences, exhibitions and online news and information portals in the area of biometrics, secure government-issued credentials and digital identity.
In 2007, Mark established and remains the leading force behind the highly successful SDW exhibition in London, which focuses on the development and use of next-generation identity credentials for government and citizen ID markets.
He has overseen the evolution of SDW into Identity Week, which sees the addition of  Planet Biometrics and Digital:ID. He is also Event Director of Identity Week Asia, which takes place in Singapore, and connect:ID, taking place in Washington, DC.
Mark is also the Managing Editor for the Planet Biometrics, Security Document World and Digital:ID Wire news and information portals.
For 15 years, until 2012, he was programme director for the Elsevier Biometrics show in London. He is also regularly quoted in leading international science and business publications and is a frequent speaker and moderator at major international conferences.