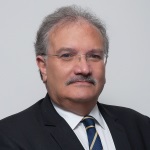 Jon Shamah is the Chair of EEMA, the European identity and trust think-tank.
Jon is a graduate of Southampton University, specialising in Aeronautics & Astronautics, and is a Digital Identity & Trust Subject Matter Expert, specialising in maximising the technology and operational value chain of very large scale eID schemes and national eID programmes. In 2017 Jon was listed in the One World Top 100 Leaders in Identity.
He is a frequent public speaker on issues surrounding Identity and Trust and facilitated the ministerial eID workshop in Poznan, Poland which directly led to the eIDAS, Trust Services regulations.
Jon has commercial experience working for organisations such as Hitachi, McDonnel Douglas, and Thales.
Jon was a long-term consultant on eID issues to the Nordic Banking and Payments Consortium, NETS, and contributes to European Programs such as SSEDIC, STORK2.0, ATTPS, FutureID, FutureTrust , LIGHTest, and LOCARD. He works with leading organisations such as ENISA on both eID and CyberSecurity standards and advises a number of governments on eID strategy and policy.
Jon is former co-chairman of ITU-T, SG17, Joint Coordination for Identity, and is a member of the Advisory Board of a number of European organisations and projects.