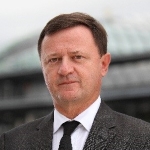 Identity Week - Day 1: Opening Keynotes
"Identity on the Move"
Identity is a fundamental right of every citizen. With it, we can prove who we are and access crucial services and benefits. Today, the way we use our identity has undergone significant revolution. No longer is it limited to a piece of paper ౼ instead, we can identify ourselves simply by being ourselves. Biometrics and eIDs will give citizens access to the world at large and control of their data at all times. And while life itself is streamlined, these groundbreaking developments as well as the growing interoperability of systems will drive even better security and vigilance.
IDEMIA leads the market in biometric solutions that promise convenience, efficiency, and security.

Biography:
Holding a Master in Management (Paris Dauphine), François joined the young start-up Morpho Systèmes in 1988 as Finance Controller and further Director of Finance and Administration until 1993 when SAGEM took over Morpho Systèmes.

From 2003 to 2007, he was appointed Managing Director of the Government Solutions Business Unit within the Security Division of SAGEM, to which reported the Criminal Justice Department, the Identification Systems Department, and the Border Control Department.

François Perrachon has been Senior VP, Sales Development (Corporate) as well as Senior VP, Sales within MORPHO’s Identification Division from 2007 to 2012. He was also member of the Executive Committee, from 2007 when the company was created, to 2013.

He has been then Senior VP, Strategy for MORPHO until 2014 and Senior V.P International Development, within the Strategy & Development Directorate until 2017.

With the setting-up of IDEMIA in 2017, he became Senior Vice President, Global Sales for the B.U  Public Security & Identity.