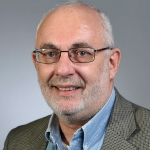 Identity Week Plenary Keynote - Day 1
"Will Robots Need Passports: Rethinking Identity for a Connected World”
We don’t seem to be making much progress on identity. If anything, we’re going backwards. Identity theft and fraud are out of control. As the noted internet security expert Bruce Schneier has said, anything connected to the internet can be hacked, and everything is connected to the internet, therefore everything can be hacked.

We need digital identities not only for people and companies but for things too: cars and bots and pacemakers and buildings and… everything. David sets out a model for digital identity that will help managers, technologists and others come together with a real understanding what digital identity is and how it can be used to deliver new ways of working, new lines of business and new opportunities for stakeholders.

Biography:
David G.W Birch is an author, advisor and commentator on digital financial services. He is Global Ambassador for Consult Hyperion (the secure electronic transactions consultancy that he helped to found), Technology Fellow at the Centre for the Study of Financial Innovation (the London-based think tank) and a Visiting Professor at the University of Surrey Business School.

He is an internationally-recognised thought leader in digital identity and digital money; was named one of the global top 15 favourite sources of business information by Wired magazine and one of the top ten most influential voices in banking by Financial Brand; created one of the top 25 “must read” financial IT blogs; was found by PR Daily to be one of the top ten Twitter accounts followed by innovators, along with Bill Gates and Richard Branson, rated Europe’s most influential commentator on emerging payments by Total Payments and was recently awarded “Contributor of the Year” by the Emerging Payments Association.