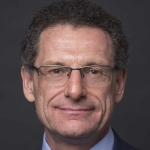 Biography:
Andrew Bud is founder and CEO of London-based iProov. iProov is the world leader in secure, usable face authentication for identity onboarding and online access.  Led by a team experienced in large-scale cloud services and advanced machine learning, iProov has been recognised by many awards from organisations including the NCSC, SINET, Citi, and KPMG. iProov has eleven granted patents on its technology, which has been adopted by banks and Governments worldwide.
Andrew is an experienced technology entrepreneur with a thirty-year career in mobile.  In 1999 he founded mBlox, which become the world’s largest provider of text messaging for enterprise applications. As CEO, Andrew built the firm into a successful international telecoms business and from 2003, when he became Executive Chairman the company grew to annual revenues of over $100 million. He served on the Board until its sale in 2016.  Since 2008 Andrew has chaired MEF, the global trade association of the mobile ecosystem.

He was the founding CTO of Omnitel Pronto Italia (now Vodafone Italia), and creator of Europe’s first wireless on-premises data business. Andrew has a degree in Engineering from the University of Cambridge and is a Fellow of the IET.