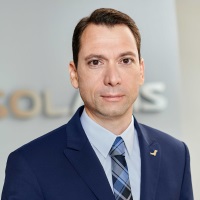 Petros Spinaris is a Deputy CEO of Solaris Bus & Coach S.A. responsible for Sales, Marketing and After Sales.

Petros Spinaris has an extensive professional experience across multiple sectors, in particular in the automotive industry. After graduating from the University of Westminster in London where he obtained a Master degree in Logistics and Supply Chain Management he began his career in the Fiat Group. Later he worked for nearly 7 years in various positions at Evobus (Daimler bus division), leaving the company as an After Sales Department Manager.

In 2009 he commenced his employment at Solaris Bus & Coach. Initially as a Manager of subsidiary in Greece and later in the company’s headquarters in Poland where he was managing the Sales and After Sales Department. In 2018 he left the company and has spent several months holding a position of Vice President & General Director of Mobile Climate Control Sp. z. o. o.

Since May 2019, Petros Spinaris has been appointed a Deputy CEO of Solaris Bus & Coach S.A. responsible for Sales, Marketing and After Sales.

At his leisure time he enjoys sport, including playing tennis, swimming, cycling, running and cross fit. He also likes to follow the Formula 1 racing.