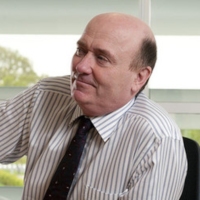 Neil became Interim Chief Executive Officer in June 2018 and has held key senior roles at Ordnance Survey since joining in 2001, including a prior period of Acting Director General and CEO from April 2014 to June 2015.

Since November 2017 he became responsible for leading strategic growth for both GB and international markets, as we deploy ongoing investment in new data and services. Allied to this Neil is supporting the development of propositions for service offers in Geospatial Production, Land Administration and Infrastructure.

Previously at Ordnance Survey, as Chief Operating Officer, he led the survey operations, maintenance and updates to our digital mapping database and more recently was also responsible for engineering and development within the business.

Neil was previously employed by the GPS and location-based services company Trimble® from 1990 to 2001 as their European, Middle East and African (EAME) Technical Director and as their responsible business manager for the construction, machine automation and precision farming market segments.

He has been heavily involved in the adoption of GPS across many varied downstream applications during this period of rapid growth for the company. Neil started his career as a surveyor in the offshore engineering industry working in many countries around the world.

Neil is also the author of many papers and the book Global Navigation: A GPS user’s guide and holds several patents in GPS applications.