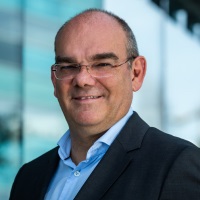 He started his professional activity as Engineer in Caracas, Vienna & Barcelona.

He is involved with Public Transports since 1992 when he started at Transports Metropolitans de Barcelona (TMB), Barcelona. In this company he played different roles as Director of IT Software Developing in PC (1992-1994); Deputy of the CIO (1995-1997); Manager of the Metro Line 1 (1998-2003); Director of New Business Development & External Consultancy (2004-2006); and, in 2007, Director of Research + Development & International affairs. In 2017 he assumes the Innovation area of TMB.
He is member of the International Public Transport Association (UITP), Vice chairman of the Transport & Urban Life Commission at UITP and member of the European Railway Research Advisory Council (ERRAC).