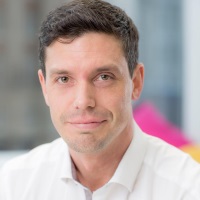 Trainline is the leading independent rail and coach travel platform selling rail and coach tickets to millions of travellers worldwide. Mark is at the helm of Trainline's disruptive technology, driving forward its innovative vision and the infrastructure delivering this and has been central to its digital transformation – leading a large-scale cloud migration to AWS while building a culture of innovation powered by autonomous, agile and cross-functional teams. Independent auditor Corsis recently awarded Trainline’s technology infrastructure with one of the highest ever ratings achieved, and Mark’s frequently been named as one of the UK’s top technology leaders.

Before joining Trainline in March 2014, Mark founded Europe's first secure eCommerce site in 1995 and has led innovative teams at companies such as Capital Radio, FT.com, Trayport and CPA Global. He quite simply loves technology and passionately believes that empowered teams of smart people will shape the future of smarter train and coach travel for customers.